A small concrete building, stained black and sculpted into a cosy looking sculptural form, was one of the Arsenale highlights for me at Venice Biennale 2016. The elemental yet subtle use of materials in this building by Chinese architect Zhang Ke seemed to derive from the concrete spaces imagined by Le Corbusier, and on some level from brutalism in the raw handling of the material.

Zhang Ke is making work that’s hugely significant now. He has just received the Alvar Aalto Medal, which has been previously given to leading architects such as Tadao Ando, Alvaro Siza and Steven Holl. The award is given to architects who’s work is seen as a continuation of Aalto’s legacy. “Aalto has inspired me for decades already, since I was a student. Two days ago I was again in the Aalto Studio and the House , and I still discover new things. The magic with Aalto’s work is that first you don’t see anything surprising, but the more you look at it, you can discover many small things,” Zhang Ke says.” His House is put together with a lot of inventions, but they are discreet. So I would say ‘discreet innovation’ – that’s why Aalto is becoming increasingly known around the world.”

When Zhang Ke rose to the podium at Aalto’s Finlandia Hall to receive the medal, he first pointed out not being as young as he looks. Born in 1970, he studied in China and later at Harvard and had visited the Aalto Studio and House as a student already previously. He is one of the young generation, with an international outlook, but a great sensitivity towards materials and natural forms.

The small children’s library in rough concrete showcased at Venice, designed without any of the usual ‘fun-and-friendly’ semiotics, felt like the cosiest place to spend time in. It looked inviting and elegant, like a minimalist hut for thinking and reading. Another building project, a cultural centre in Tibet, has been crafted from stone quarried nearby. Using traditional stone building methods, the architecture feels sculpted into its surroundings, nestling on the riverside.

At the opening of the exhibition, which also celebrated the 50th anniversary of the Alvar Aalto Medal, I got a chance to ask Zhang Ke about the use of materials in his buildings. “I’m very interested in materials of the place. Materials carry a lot of information about a place,” he said, “Also a material that ages in the place, creates a connection to the place and to human beings. The craftsmanship that embodies the knowledge of the people, who know how to do it, carries on the culture.” He sees great value in traditions: “You can use this in a surprising way. So in a way it’s extremely traditional, but at same time we know that it’s not.”

Zhang Ke’s buildings sit neatly in the landscape. Or in packed urban environments squashed into the heart of the old city fabric, as in the contemporary hutong extension, where again Zhang Ke moulded sculpted forms out of concrete. “Usually people think new materials represent something new for architecture. I don’t think so. Or it depends… It can be the most humble material that carries the contemporary sense.” Zhang Ke says. 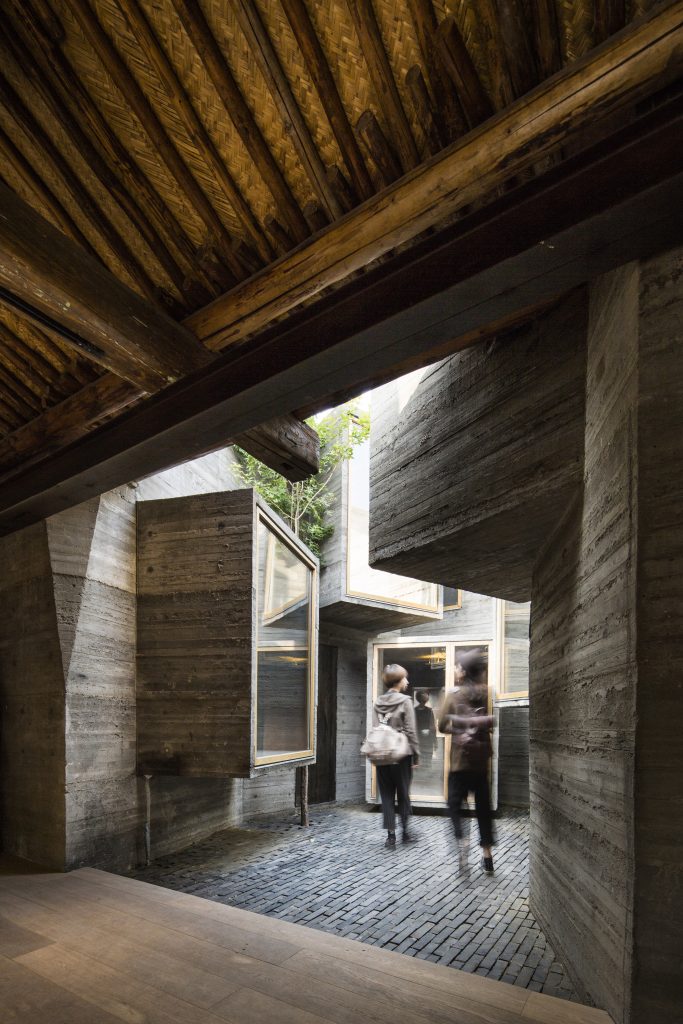 The way in which Zhang Ke uses humble materials is hugely inspiring. Creating something extraordinary from dark stained rough concrete for children, shows how a careful play with material and form can bring beauty into the world. “I don’t think of material as a statement, but something that connects the emotional aspect of people, of the visitor and the people who live there with the place.” he says.